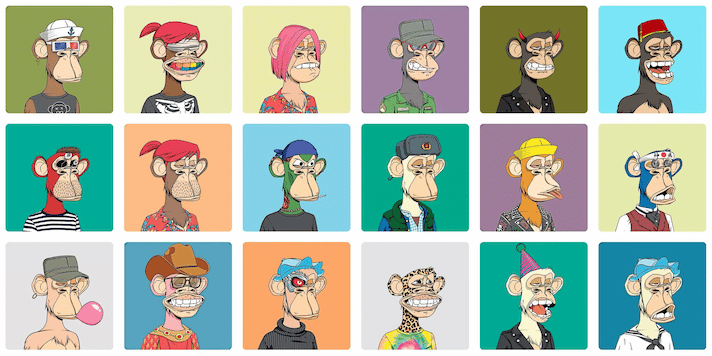 Despite the recent crypto bear market, which has seen several digital assets lose more than 60% of their value over the previous four months, the NFT market has remained stable. Some of the top-selling NFT compilations available right now are mentioned below:

After retaking the top rank the previous week, Terraforms, an NFT collection from Mathcastles, has retained its position. The 24-hour sales figure for the Terraforms NFT collection is 1,819 ETH.

The floor cost of Terraforms has increased by 2.6% to $2,240 within the same time frame. The market value of the NFT collection as a whole is $22 million.

In our ten top-selling lists, Larva Labs' CryptoPunks NFT collection has moved up two points, moving from fourth place last week to second this week. 813 ETH were sold via PUNK during the course of a day.

After moving up to third place from tenth place the week before, Bored Ape Yacht Club NFT collection has maintained the top rank this week. 429 ETH were sold throughout a 24-hour period by BAYC NFT collection.

However, during the previous 24 hours, its floor price and market capitalization have decreased by 2.2% to $99,019 and $990 million, respectively.

Otherdeed, an NFT collection from Yuga Labs’ metaverse venture Otherside, ranks fifth on our ten top-selling NFTs this week with a 24-hour sales volume of 203 ETH. It has a floor price of $2,155 and a market cap of $215 million.

After dropping out of the top ten margins the previous week, Azuki, an NFT collection from Chiru Labs with a fixed set of 10,000 avatars, has reemerged in our ten best-selling lists this week. Azuki has a market worth of $147 million and a 24-hour sales volume of 175 ETH.

Smol Joes, an original set of hand-drawn NFTs on the Avalanche blockchain, is now ranked seventh after moving up from ninth place the previous week. SMOL has a market value of $606,354 with a 24-hour sales volume of 14664 AVAX. The starting price is $6,063.

Another NFT collection from Yuga Labs, Mutant Apes Yacht Club, fell 6 points from second place last week to eighth place this week. MAYC has a market worth of $364 million and a 24-hour sales volume of 129 ETH.

Out of the top ten selling NFTs, Genuine Undead, a collection of set editions of 9,999 pixel-themed NFTs on the Ethereum network, is in ninth place. The Genuine Undead NFT collection sold 128 ETH in 24 hours. It has a $941 floor price and a $9 million market value.

The first NFT collection from The Sandbox metaverse to make an appearance in our top ten list was LAND. The NFT collection has had 110 ETH worth of sales in the last 24 hours. LAND has a $275 million market value and a $1,677 floor price.

After selling its first batch of Ultra Rare NFTs, Tamadoge  has continued to be popular in the cryptocurrency community in terms of fresh NFT drops. Tamadoge, a metaverse game with a dog meme theme, plans to release two further collections this month, each with 1,000 Rare Pet NFTs and 20,000 Common Pet NFTs.