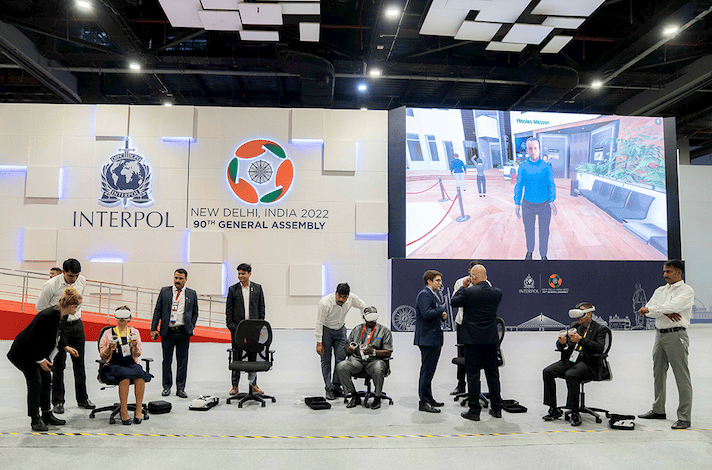 The first ever completely functional metaverse has been introduced by the International Criminal Police Organization (INTERPOL). Interpol will be able to provide immersive training programs to law enforcement organizations all around the world thanks to the new virtual environment.

On October 20, in New Delhi, at the 90th Interpol General Assembly, Interpol made a surprise announcement  about the metaverse program. Delegates from the security industry from across the globe attended the conference. Some attendees were given permission by Interpol to join the meeting virtually via their avatars by wearing virtual reality headsets.

Interpol claims that the new virtual environment would make it simple for registered users and security officials to exchange ideas and connect with other police all around the world. The Interpol General Secretariat offices in Lyon, France will be virtually recreated for people to tour via the police metavese.

The Interpol Capacity Building and Training Directorate will be represented in the group of specialists that will be formed, according to Interpol's announcement. Users of the new panel will have access to immersive training modules for metaverse policing and forensic inquiry.

A live demonstration of a training program on passenger screening and travel document verification "using Interpol capabilities" will also be conducted by the expert team. Additionally, these professionals will discuss a variety of issues facing law enforcement everywhere.

When crime rates are rising in the metaverse, the new Interpol metaverse arises. In September, a South Korean court handed down a four-year prison sentence to a guy who had allegedly created and stored material that included juveniles that he had allegedly been seduced online.

Mr. Oberoi, the Executive Director of Technology and Innovation at Interpol, said at an interactive event in New Delhi on the new police metaverse initiative:

“The Metaverse has the potential to transform every aspect of our daily lives with enormous implications for law enforcement. But in order for police to understand the metaverse, we need to experience it.”